I rode a quick lap of No Err the other morning. It was 10 days since the Nimby Fifty bike race had sent 230 riders that way, and I assume that four of those racers were responsible for the discarded energy gel packets I picked up along my ride.

A few scraps of litter doesn’t seem too bad an impact for a homegrown five year old event that puts a carefully-capped number of people out riding local trails. The gooey mess left in my shorts pocket will wash out. And while there’s nothing Zero Waste about the packaging – do those things ever decompose? Surely there’s an eco-alternative? – I rode away, happy to have done my bit to clean up the trail. I had a good buzz from sucking in all that forest air, from my new-to-me bike, so my mind was set to “How can we do better?” instead of “Pemberton is closed. All you people should go away.”

After all, everything we do has an impact.

We’re humans. It’s in our nature to impact the world around us. Each of us, in our own ways. Collectively is where it gets tricky. The more of us there are, the worse that impact seems to be and the harder it becomes to answer “how can we do better?”

It reminded me of a conversation I’d had with Matt Forkin, a 32 year old engineer and primitive skills practitioner, for a story I wrote for the latest issue Coast Mountain Culture magazine. (Download the article here CMC 12g StoneAge)

Forkin explained the difference between his philosophy and mine.

Leave No Trace has always been what I’ve aspired to – the highest and best way to be in Nature – tread lightly. Pack it in, pack it out.

Forkin explained the lineage of that approach – “it’s really grown out of organizations like NOLS or Outward Bound. How do we use a gear-intensive way of being in the natural environment, but minimize the footprint. It operates from the philosophy that we belong in cities, but can go to the wilderness to relax.”

Tom Brown Jr, one of the influential developers of primitive skills, and one of Forkin’s earliest teachers, likens the Leave No Trace approach to being an astronaut. Or a scuba diver. You go into strange new environments, carrying your life support system with you. If anything fails, you’re pretty much dead.

Forkin’s primitive skills philosophy has indigenous roots and is a completely different approach. “Primitive skills is a way of looking at people as part of nature. Nature impacts us, as we impact it. And there’s a huge need to increase the accessibility of this life to all people, because that’s really what needs to happen in this world right now. There’s a huge need for people to have a connection with the earth, and what feeds and nourishes us. More than heading out for a leave no trace adventure with fancy Vibram sole boots and down-filled Patagonia jackets, eating freeze dried food from REI. That’s kind of disconnected. We actually need to enter into a relationship with the wilderness.”

Primitive skills is about integrating yourself into the ecology of place – knowing how to take what you need from the world around you. In a way, it might be more pro Nature, than leaving no trace, even though you might cut down a tree, or deploy something for your purposes, or create a shelter, because you are entering into a relationship with the natural world. You’re not just skimming across the surface of it, be it lightly, or more heavy-footed. You don’t ever believe you are independent of it. You are entirely dependent on it. Interdependent. I think this might be a better way to think.

Even though it will likely have more of an impact. But maybe we need to rethink impact.

I’m rethinking this idea that the best thing we could do, the most righteous way of operating in the wild world, is to leave no trace of ourselves.

Why not aim to leave things subtly altered for the better.

See garbage in your favourite place? Pick it up. Tree down on your trail. Jump off your bike and move it out of the way. Got something inside you to express? Take a leaf from Chili Thom’s book and put it on the page. See a country collapsing? Try and help re-home one family. See someone suffering? Say, hey, let’s find a way to celebrate you. Let’s do something. Act. Have an impact. Not get so caught in minimizing the way we affect the world around you. Maybe think about maximizing it.

Take that Leave No Trace philosophy, and give it an upgrade. Leave trace of love.

On Saturday, June 17, the Pemberton Downtown Barn will be home to an adults-only hoe-down, a $20 a ticket fundraiser for the Pemberton Refugee Resettlement Group and the Gord Downie Fund for Brain Cancer Research. Country classics by DJ Rich-A, with special guests Marble Canyon. Mayor Mike Richman will be working the BBQ. Coast Mountain Brewing supplies the beer. 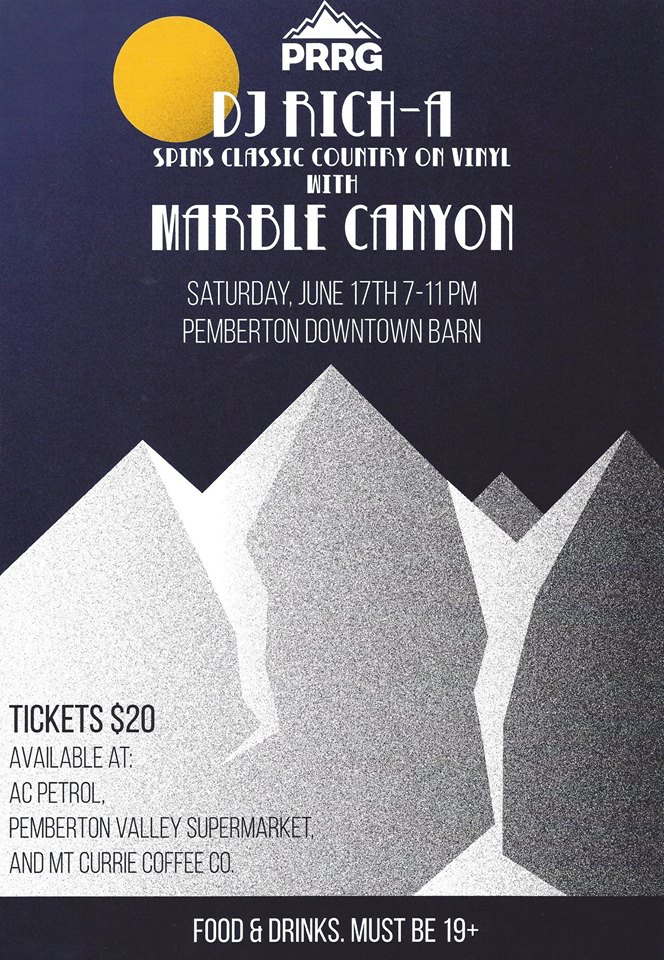 Because this is what we do, when confronted with things that seem impossibly big, impossibly awful, and slightly paralyzing – Syria, brain cancer, the great big Overwhelm. Ask: how can we make it better? Do what we can. Infuse it with love. Then get together and dance our collective asses off.