I’m sitting up until midnight to try and register my kid for the last remaining spot in pre-school swimming lessons at Meadow Park. I’m a non-resident, so I have to wait until all Whistler residents get their pick of the spring programs, and I’ve watched as the spots slowly filled up with a vague sense of panic, anxiety and disgruntlement – a combo pack of emotions that I have come to know as a Scarcity Attack.

Yesterday, I left the house mid-bickerfest, sniping and sighing and eye-rolling as I got in the car. Parenthood has an interesting way of turning partners into adversaries – you’re both competing for the limited resource of free time. It takes constant effort to think like allies, instead of squaring off against each other, keeping score, nursing grudges.

I’d shrug all this off as just a passing personal life stage, if I didn’t look around and see the scarcity mindset at play everywhere – a finite number of parking spaces, good jobs, untracked snow, personal space, injects an unavoidable edginess to life in Whistler/Pemberton. Brexit, Trump, the rise of nationalism and anti-immigration thinking – doesn’t it all boil down to the same thing?

A sense of scarcity does not bring out the best in anyone.

Trouble is, most of the scarcity triggering us is perceived, more than real.

How will we handle the actual crises that climate change scientists predict are headed our way?

Early this winter, I interviewed Matt Forkin, an artist and mechanical engineer based in San Francisco. He spent a couple of years after University making solar panels, designing factories, consulting in engineering and then, quit his job so he could immerse himself in the outdoors and indulge some of the personal passions he’d neglected while working.

He spent the next two years living off-the-grid, building his own shelters, hunting, fishing, trying to be as hands-on with all aspects of his life as possible. He ended up involved in a program in Twisp, Washington, that teaches people stone age skills. From making fire without matches, to foraging, tanning, weaving, the Living Wild project is a kind of deep reconnection experiment in living primitively with the elements.

Participants spent months preparing to go out on a fully Stone Age field trip. They had to make themselves a full set of buckskin clothes, and bedding from animal furs or felted mats. Their tools had to be made from bone and stone. Cooking pots were made from clay from the river. They lived at a basic camp, preparing. “The whole point of the project is not to be separate from nature,” said Forkin. “Not buffered from it at all, but living with it. And that, in my mind, was a chance to think about who we are as humans.” 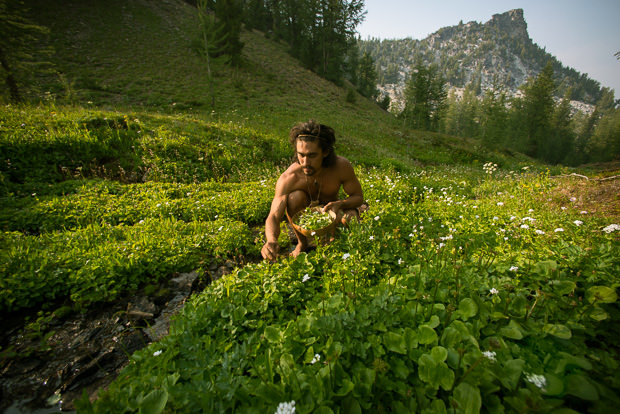 When Forkin and his cohort of neo-paleo-players headed into a high alpine area in the northern Cascades for their Stone Age immersion, they encountered unexpected challenges. For all their diligent preparation, they’d not trained how to work together. Wildfires filled the sky with smoke. Food on the ground was hard to find. People’s prepared supplies began to run low. Some had less than others. Tensions broke out.

Forkin recalled there being a lot of fighting. It took some time before the group reached a turning point. “We finally said, if this was literally our family, we would choose to be generous. The most important thing is that we’re doing this together. As a clan. And that’s what we decided to do. It was a beautiful moment, but I wish we’d had that from the start.”

The experience changed Forkin. When he returned to the Bay area, he began working with non-profits and start-ups that are trying to develop alternative, less destructive, ways of making things. “I was making a lot of money working for a large manufacturing company building factories in Asia. But I feel aligned with the work I’m doing right now. Yes, I could do okay just taking care of myself. It would be easier. More convenient. But would it be better? I don’t think so. We need to build systems to benefit all beings for the future. I think there’s room to find abundance for everybody. And I’m trying to be part of that work.”

I think about Matt, and his friends, barefoot and buckskin clad out in the Cascade alpine, when my Scarcity Attack flares up. I think of them choosing to resist the panic and meanness. Choosing to care for the needs of someone beyond their own.

And I wonder what would happen if we all practiced resisting the idea that scarcity is everywhere? What if abundance is a state of mind? What if the thing we actually need, more than a hoard of fresh powder and a pile of money all to ourselves, is each other?

Photos by Kiliii Yuyan from the Living Wild project.