My spousally acquired health benefits expire when the ski season ends, so in April, I decided to make a last minute, literally down to the wire, effort at addressing a chronically neglected issue and its mysterious new sidekick, by booking a visit to a physiotherapist.

Cue several lightbulb moments: this Sea to Sky community is jam-packed with brilliant, passionate, exceptional therapists. Half a year of benefits is better than no benefits. It’s never too late to learn to speak body, but man, every lost decade of wellness illiteracy is regrettable.

One tiny exercise, in the mind-opening advice that Tall Poppy’s Vicki Powell gave me in our two sessions, reminded me of the time 15 years ago when I went to see a physio. In a 15 minute consult. For the same condition. Which I didn’t really follow through with.

What was the difference between now and then, I wondered? Why didn’t it stick the first time?

Maybe because I’m older and wiser, or more desperate to address things, being slightly further up to speed on the consequences of ignoring things, health or other vehicle maintenance related. Maybe because it was explained to me better, so my brain could grasp it, during a one-on-one one hour consultation in her new home-based studio. (Not a shameless plug. Just a suggestion that maybe there are better (and more satisfying and sustainable) operating models for wellness than 15 minute consults and overworked health providers throwing people on machines as they race back and forth and fill in charts.)

But, late-breaking life epiphany! One of the compelling things that is different is that I have a relationship with Vicki. Albeit a loose one, it is still a relationship. I know her name, the name of her husband, I know where she went to high school. We’re friends on Facebook. We’ve had a coffee together. Sometimes we see each other grabbing a burger at Mile One Eating House. Mostly by virtue of living in this same small community, I have a little bit of a relationship outside of our professional/brand new clinical relationship.

I’ve fidgeted with these ideas of wellness and self-care for a while now, kind of in the same way I play with a piece of playdough – never really making any real progress, often falling back on the same ideas or shapes (a worm! A ball! I really ought to floss more!), but the relationship piece has been missing from my thinking.

I’ve been trying to do this self-care thing all on my own.

In fact, I’ve kind of assumed that was my obligation. To quietly and solely manage my health and wellness, so that I can then bring my best self into my interactions with the rest of the world.

And yet, in 2014, writer and psychologist Susan Pinker accumulated a mass of evidence that proves that the more connected you are, with real-life relationships, the healthier you are.  (PS Facebook friends don’t count.)

Her resulting book, “The Village Effect: How Face to Face Contact Makes Us Healthier and Happier,” basically revealed that health outcomes are better for people who have people – ie a solid community, a network of relationships, regular face to face contact.

As in: women diagnosed with breast cancer have a higher survival outcome if they have more real life relationships. 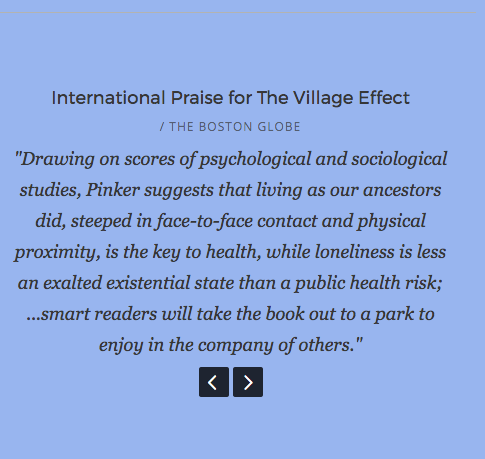 Or, as the Boston Globe wrote when reviewing the book, “Living as our ancestors did, steeped in face-to-face contact and physical proximity, is the key to health, while loneliness is less an exalted existential state than a public health risk.”

I like my alone time. I really do. Especially when it comes to toileting. Toddlers ask a lot of awkward questions when you’re going to the toilet, through which you are rapidly confronted by your inadequate knowledge of body science.

But loneliness has become an epidemic.

It makes perfect sense to me. I think we isolate and alienate ourselves as a form of self-protection. And then it becomes habit. And we don’t know how to break out of it.

At least, that’s what I observed growing up from the people around me.

But isolation takes a health toll. Because we are tribal creatures. Or as Brene Brown says, we are wired neurologically for connection.

Extroverts probably have this dialed.

A long-term study just officially confirmed: the more you use facebook, the worse you feel.

“while real-world social networks were positively associated with overall well-being, the use of Facebook was negatively associated with overall well-being. These results were particularly strong for mental health; most measures of Facebook use in one year predicted a decrease in mental health in a later year. We found consistently that both liking others’ content and clicking links significantly predicted a subsequent reduction in self-reported physical health, mental health, and life satisfaction…. While screen time in general can be problematic, the tricky thing about social media is that while we are using it, we get the impression that we are engaging in meaningful social interaction. Our results suggest that the nature and quality of this sort of connection is no substitute for the real world interaction we need for a healthy life.”

hat-tip to Jocelyn Glei for this study

So there’s no real workaround.

Which brings me to the million dollar question: are you investing in relationships with the understanding that our wellness might be at stake? Understanding that, the time you take to be in a group, to go for a bike ride with a group of people instead of by yourself, to go dancing with friends, or to play cards or a board game instead of sitting next to each other on the couch on your screens, or to stand on a street corner and chat with people instead of racing off to your next chore/meeting/to do list item or to talk with another sleep-deprived mama at the playground even if it’s really hard to make small talk with a complete stranger and brings up all your high school STUFF – those things might save your life.