Dear Robin,
I was 100% in your corner last night at the Deep Winter Photo Challenge, but damn, was I nervous for you. “First woman competing for the King/Queen of Storms title.” Girlfriend, that’s a lot to carry on your shoulders.

I love that you owned that, telling the Pique “I hope I can rock it for the girls.” And I love that you resisted becoming the spokeswomen for female photographers or under-represented women in the industry generally when reporters probed for juicy quotes: “I don’t think I’m going to touch that, thanks.” I love that you spent days in the lead-up to the event, scouting locations, exploring story angles, canvassing for subjects, preparing, researching, talking to people. I love that the compressed time-frame of the contest forced you to trust your instincts and your voice. But more than anything, I loved your 5 minute show.  By choosing to feature women, you broke even more trail. The only time I’ve ever seen girls featured in Deep Winter shows was as bikini-clad pro-hos in the hot-tub scenes. Your female athletes are deeply dedicated to Winter, to skiing, to the mountains, but you also showed that they are more than that, they are also partners, supporters, wives, mothers, working just as hard when they’re off the mountain… 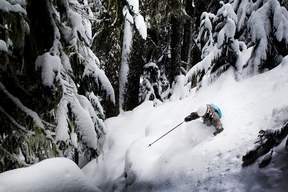 It’s probably because I’m a girl that I was crying watching it. But when at least half the room got to their feet to cheer and applaud when they handed over that giant cheque for 2nd place, it was a crowd full of men and women, locals and friends, all cheering because you told beautiful stories artfully, soulfully, well.

As for me, I was cheering because I was proud of you. And because your show was so strong and subtle and resonant. And spoke to some deep place that I’ve kept shut off from the light and tried not to feed.

The first time I wrote an article about the female energy in the mountains, someone told me I was a man-hater who should leave town. The next time I wrote an article about women working on the mountain, my boss, who had never commented on any other article I’d written, pulled me aside and suggested I’d made some people uncomfortable. That was the last time I wrote about girls. That was 2005. Which is a shame. Because this town is full of amazing stories, and at least half of them are stories about women. Thanks for owning that. So that we all can.