“You know that rule in skiing or biking where you don’t look at the tree you’re trying to avoid?” says Kathleen van der Ree, one half of Squamish’s Northyards Cider Co (and a partner with law firm Race and Co “on the side”.) Having grown up in a family of restauranteurs, van der Ree spent her young adult life shunning the restaurant industry. “And now I’ve smashed into the tree head-on!” 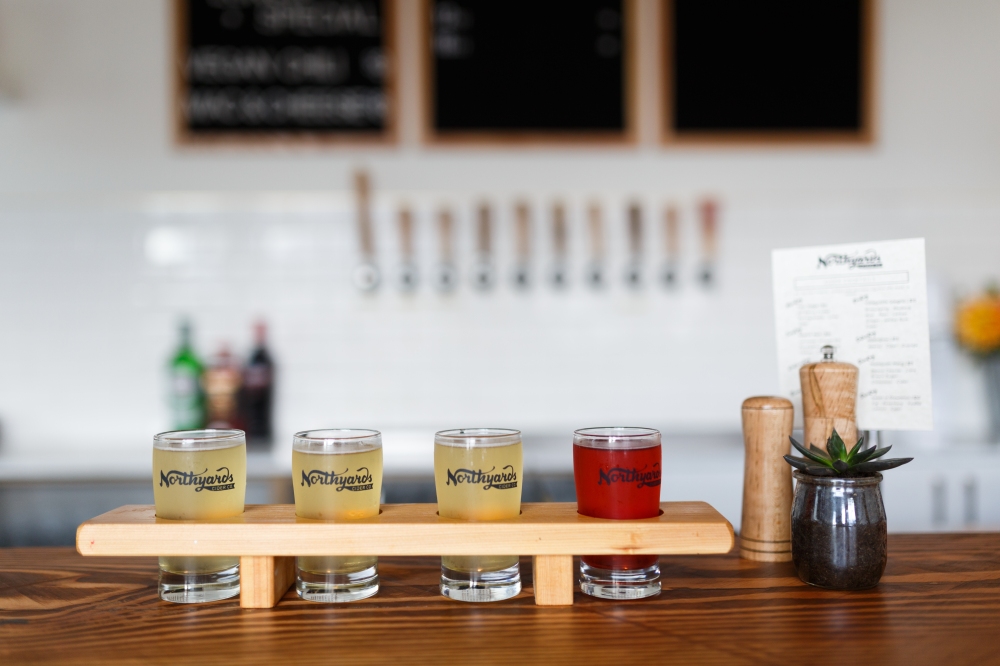 Her other half, in love and cider, Alison Round, spent five years planting trees, and another eleven hauling mailbags for Canada Post, before plunging head-first into her career second act as Northyards’ cider maker.

“The funniest part of this dream,” says Round, of the business they opened in late August 2018, after nurturing it from paper to apple press for four years, “is that I didn’t really drink before Kathleen and I met. A bottle of wine could easily sit for three weeks in my fridge.” But that was before she discovered craft cider.

How does a kombucha-drinking vegan who hates beer, and a lawyer who grew up avoiding the family restaurant business, come to open a craft cidery and tasting room in Squamish?

Early in their relationship, Round and van der Ree ended up at a Beer Festival in Bellingham. “I am not a beer drinker at all, “says Round. “I one-hundred-percent hate it. I realized if I was going to have any fun at all, my only hope was in the two craft cideries that were there.” Blown away by the taste of a traditionally brewed craft cider, compared to the flavoured sugar water that is more typically sold as hard cider, Round became a convert.

“I’ve always been interested in craft.” A certified nutritionist, Round has been brewing her own kombucha for two decades. Cider is traditionally made purely by adding yeast to fresh pressed apple juice to incite fermentation – a craft that pre-dates the Roman invasion of England in 55 BC.

In the ensuing years, Round’s newfound interest in cider combined with van der Ree’s great palate to fuel foodie roadtrips to California, Washington and Oregon. “We tried millions of different types of cider,” say Round. Apples have twice as many genes as humans do – their flavour profiles are incredibly diverse. No two batches of cider will ever taste the same. Round started brewing herself, filling their apartment with her experiments, taking cider-making courses, connecting with cider masters, perfecting her craft.

Improbable or cosmically destined, either way Northyards Cider Co is an awesome addition to the region’s craft beverage landscape. It opened in late August 2018, in an industrial pocket of Squamish, offering five dry and semi-dry ciders on tap, made sfrom apples sourced from a family-owned orchard in the Okanagan, and with a menu chock full of local produce, humane meats, gluten-free offerings, and Pemberton organic potatoes. Their first product bottling commences this spring.

“My family’s restaurants were casual,” remembers van der Ree, “but the food was always made up with thoughtful ingredients. My dad would drive from farm to farm in the Fraser Valley picking up eggs here and veggies there – he was doing the 100 mile diet before it became a thing. He never once promoted that aspect of the food.  We’re applying the same principles to our business,” says van der Ree, giving a shout-out to Pemberton’s Helmer’s Organic Farms and orchardist John Jobst for keeping them well-supplied.

Not long after they first opened, Round and van der Ree drove up to Pemberton to pick up 500 pounds of crabapples gleaned as part of the Pemberton Fruit Tree project. Round pulled her visiting sister and family into the effort to crush and press those crabapples, generating 240 litres of juice that she then fermented, and will use to blend in with their base apple cider. They also partnered with Solscapes Landscaping in Squamish as part of a fruit tree gleaning project, to harvest apples from heritage fruit trees located around the district. These bear attractants were turned into the Squamish Heirloom Cider, a special blend that was released earlier this month to guests at Northyards’ first Cidermakers Dinner, and will be available in the tap room after its re-release at the Squamish Food Policy Council’s April 10 Social.

“Our cider is made from 100% BC apples, pressed then fermented,” says van der Ree with pride. “No sugar, water, flavouring, or grain alcohol.  Using traditional methods to make this old timey beverage is important to us.“

Echoes Round, “Being vegan, and a holistic nutritionist, I have zero interest in adding things, like chemical flavourings, that I wouldn’t want to consume myself.”

It’s so obvious, it shouldn’t be radical. Should be simple to do something as old-school as offer a small-batch traditional craft product, made with direct-sourced ingredients. But the paperwork-maze that surrounds operating a craft cidery warrants a law degree, (lucky for the Northyards’ braintrust) – be that to navigate District planning restrictions, BC Liquor Distribution categories that mark the price of craft cider up 73% as an alcopop instead of in alignment with the 12% on craft beer, or restrictive tax categories that van der Ree believes are holding an amazing growth industry for BC back. So while Round keeps the batches brewing, van der Ree keeps busy with the administrative side of the operation, dreaming up menu items and events, and writing position papers to advocate for a more enlightened regime.

BC Craft Cider industry is currently estimated at $2 million. Ontario’s is $35 million. The potential to close that gap in BC is stymied right now, in van der Ree’s opinion, by forcing small batch craft ciders to compete directly with mass produced, sugar-filled, heavily carbonated alternatives that are made, not from juice, but from apple juice concentrate or using artificial flavours. The products just aren’t the same. It doesn’t make sense that they’re taxed that way.

A more accurate “craft” designation for craft cideries would serve orchardists, apple growers, packers and juicers by providing a good market outlet. It would inspire more craft brewers – those without law degrees-  to enter the game. Keep the cider old-timey but update the legislation already. The world is thirsty for something good to drink.