The best drink I had over the festive season was a small plastic glass of port-wine, infused with herbs and hawthorn berries that yoga teacher Natalie Rousseau had “kitchen-witched” together for a solstice celebration she hosted. Maybe it was the 90 minutes of yoga we’d just finished, maybe it was the candle-lighting ritual Natalie had invited us to participate in to silently bestow a good wish for the women in the room, or the toast she’d offered to the low ebb of the year, maybe it was knowing that this brew had taken at least a month to steep, and I could taste the complexity, and full flavouredness of her concoction, but, unusually for me, the Great Gulper of Life and Fruity Beverages, I didn’t need to chug that glass down. It invited savouring.

A meek little mouse of a thought skittered across my mind: perhaps this is a solution to your drinking, Lisa? (A bit of self-inquiry prompted by this excellent article by Tracy Ross on the permissive culture of ski towns.) And then it disappeared into its hole, before it could be eaten by Denial, or Indignation, or straight up Hostility.

My curiosity followed that little mouse for long enough to ponder this: could more medicinal brews be the path forward? Instead of using wine to hydrate, and reward myself for getting through another day of parenting, self-employment, and winter in the valley – perhaps I could seek out water (novel thought!), dance parties, and lovingly hand-crafted beverages.

Which leads me not to abstinence, but down the road to the Pemberton Distillery, a ten year old crazy experiment in artisanal distilling that has hosted 7000 distillery visitors, won awards globally, and literally paved the way for BC’s Craft Distillery industry. The effort and attention to detail that goes into producing each batch of spirits at the Pemberton Distillery renders it utterly disrespectful to just throw it back in a race to the bottom of the bottle.

Founders Tyler and Lorien Schramm didn’t just battle resistance and regulations to build the distillery itself, from the ground-up. They were also instrumental in the development of the industry, spearheading the creation of BC’s Craft Distillery designation. It took five years of “often extremely frustrating effort” to get to that point, recalls Lorien Schramm, now older, wiser, the mother of two, and slightly gobsmacked at the tenacity they had.

The BC Craft Distillery designation that they co-crafted has subsequently paved the way for BC’s current 35 operating distilleries. Their push for changes to the regulations in the industry means that now you’ll find craft breweries and distilleries on farms, like at the Beerfarmers in Pemberton, and in downtown city centres.

When the Schramms started out in 2008, they had to abandon their original dream of setting up on Pemberton farmland, and jump through the same kind of building and fire code hurdles as if they had been building an oil refinery. 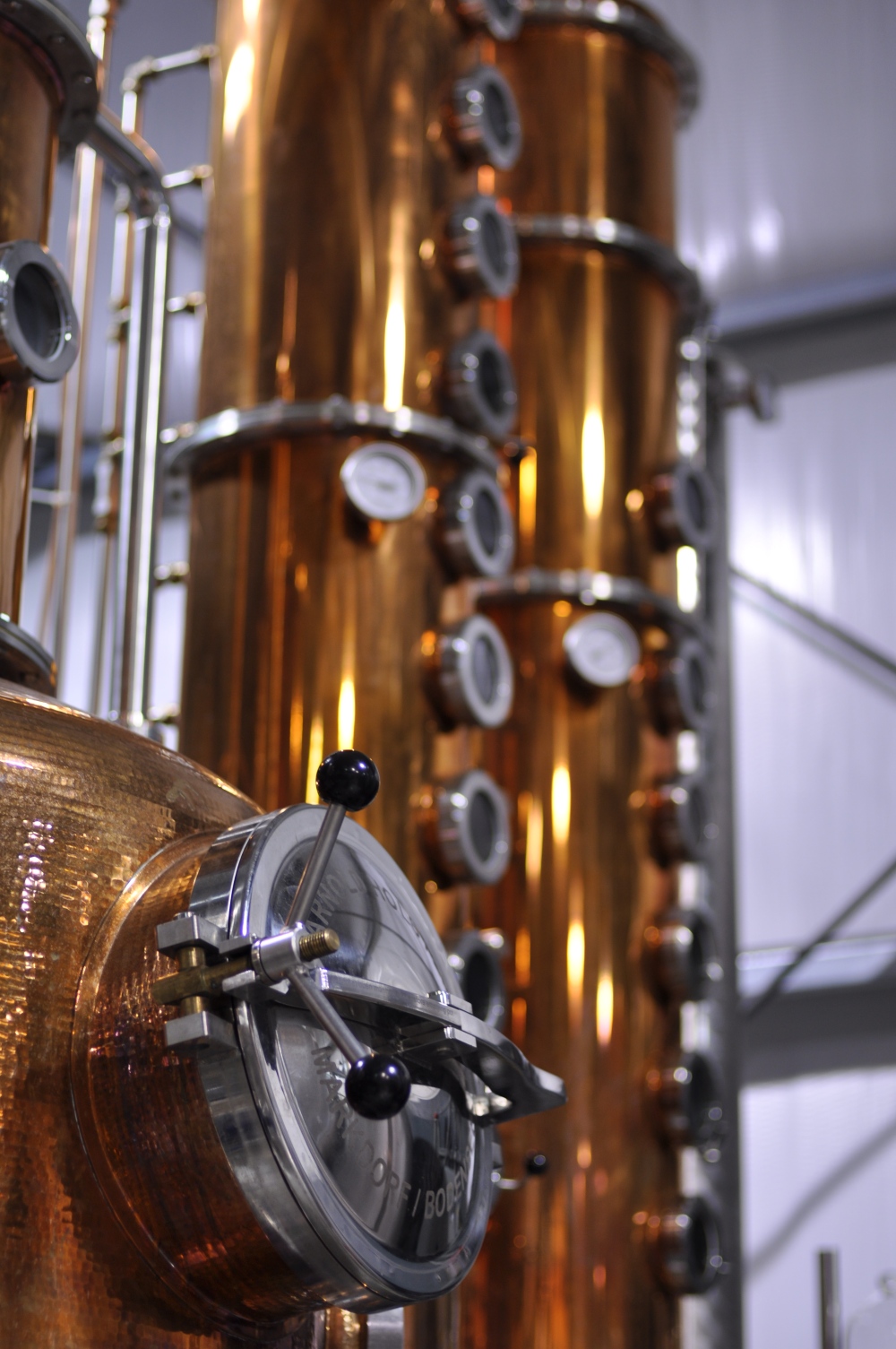 Despite this, the successful and award-winning Pemberton Distillery also now has its own 20 acre certified organic farm, just outside of town, where they plan to grow all the distillery’s herbs, fruits, nuts and grains. “Growing our own ingredients and working outside, with our hands in the Pemberton soil, offers us a kind of life balance to the mostly inside work of distilling,” says Lorien.

On the farm, Tyler and Lorien currently grow organic hops, most of the herbs and botanicals used in their Absinthe and many for their Gin and they are slowly expanding the raspberry, strawberry and rhubarb crops to eventually be self-sufficient. Wormwood grows on site like a weed, and an elderberry orchard should start producing a good flower crop this year.

Apple, pear, apricot, walnut and hazelnut trees are still some years away from bearing fruit. Until then, the Schramms handpick raspberries and strawberries for their Liqueurs at North Arm Farm, purchase apples, apricots, pears and plums from small farms in Lillooet and Pemberton, haul hand-picked  Riley Creek Farm apples over the Duffey for their apple brandy, and forage for wildflowers in the local mountains.

“We were part of the early movement towards local, craft, hand made organic, and Pemberton and the community here is a perfect example of that lifestyle and ethos. Ten years ago it felt more like a local’s secret. Now the rest of the world is discovering it. People are becoming interested and aware of what they are drinking and seeking out local, organic and craft beer and spirits.”

From the outset, the Schramms wanted to be live lightly on the earth, and be part of an organic revolution – a system in which success means going fungal, not viral, and spreading your values for greater good, rather than scaling your production for more profit. Their efforts will always be intensive, and deeply intentional, yielding an ecosystem of growers and makers with a deep passion and intimate connection with what they do, and beverages worth savouring. That’s something to raise a glass to.