I’d just finished reading The Culture Code,a book by Daniel Coyle about the culture of great groups, when I drove through the night, blasting Mofro, up the snowy winding pass to Crystal Mountain in Washington.

Pemberton skier Susan Medville, a freeskier and mountain woman originally based in Crested Butte, had invited me to join a Rippin’ Chix clinic, the women’s freeski clinics that Alison Gannet founded in 2001. I was nursing a disenchantment for what my local hill was becoming, and was curious to know if a ski resort still exists that boasts challenging skiing, good amenities, space and soul, or whether those qualities cancel each other out. It was the lure of skiing with Susan and exploring somewhere different that made me say yes. Experiencing a primer on the culture of great groups was an unexpected bonus.

A great group, Coyle discovered, when he analysed the successful cultures of IDEO, Zappos, the San Antonio Spurs, the US Navy’s SEAL Team Six , an improv troupe and a gang of jewel thieves, PIXAR, and more, exhibits three specific attributes, regardless of whether they’re trying to elicit blockbuster films, a successful military operation, or lift inner-city students out of poverty and onto honour rolls.

They signal for safety, enable vulnerability and articulate a shared sense of purpose.

Although Coyle spent four years travelling the world, gaining access to the most high-performing, high-functioning cultures he could find, the pinnacle example he could find of a great collaboration was a group of kindergartners.

In experiments conducted more than 70 times, at Stanford, the University of California, the University of Tokyo and other locations, designer and engineer Peter Skillman and Tom Wujec have found that kindergartners consistently out-perform teams of business school students, lawyers and CEOs in a creative construction challenge to build a structure in just 18 minutes from 20 sticks of uncooked spaghetti, a metre of tape, a metre of string and a single crowning marshmellow.

The only groups that outperformed the kindergarteners, thankfully, were the architects and engineers. Skillman and Wujec think it’s because kindergarteners, despite an apparently chaotic approach, are instantly collaborating, with no jockeying for status. They start prototyping instantly, and produce the tallest and the most interesting structures because they are iterating and refining constantly, getting instant feedback with each attempt.

Safety, vulnerability and a shared sense of purpose: lawyers, CEOs and MBAs don’t instinctively begin there. They’re too trained in the gladiator ways of the world.

But it’s wearing them down. Recently, a woman who was in law school at the same time as me, was recognized as Queensland’s Woman Lawyer of the Year. Anne-Marie Rice has a 20 year practice as a family lawyer and mediator, and her acceptance speech has been circulated from professional woman to professional woman in Australia, because it blows up Sheryl Sandberg’s whole idea of “leaning in” with a straight-talking admission that the successful, laudable life she finds herself in is frickin’ exhausting.

It stems mostly from the fact that the whole legal system is fundamentally aggressive and adversarial. Rice said, “the law basically invites lawyers to solve problems by first making them bigger, and then aggressively holding a position until a decision is imposed or a compromise based on brinksmanship is reached.” It doesn’t come naturally to her to think like that, but she’s learned how to excel at it. The price she’s paid for that? It’s dimmed her light.

Rice is talking about the legal system, but this adversarial ethos is baked into all our systems – media/journalism, politics, business, relationships, sport. We live in a culture that prizes competition, as a way of bringing out the best: you will give it your all, at pain of death or destruction. But even in sport, where you might think that’s the fairest way of eliciting performance, I know pro athletes whose passion was dimmed by the gladiator-vibe of elite-level competition.

It’s time, said Rice, for us to think like problem-solvers, instead of gladiators.

I feel myself rise up to that call. How can we be problem-solvers? Because there are a lot of problems to tackle. And a gladiator mentality won’t help, no matter how comforting the tough-talking Commander-in-Chief might seem.

Maybe it’s because Medville is a mom to a young son, or maybe it’s just her humble demeanour, but she instantly signaled safety to the group of women who huddled around her, after the morning split, as we launched into our weekend. As we progressively explored Crystal’s awesome chutes and alpine bowls, the group became more cohesive, slowly stepping outside the silos of our own nerves and ego-battles, to cheer each other on. We were allies, not rivals, with a shared sense of purpose – to conquer our own demons, and expand our mountain playground. 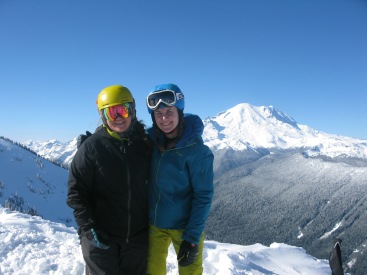 If all we have to confront the problems of our time, is a handful of pasta, string and some chewing gum, MacGyvering a better future is going to require us to get good at collaborating, and fast. Everything depends on it. And every opportunity we have to turn a randomly-assigned group into a great one, is a chance to practice what might be the most vital skill of our lives. Who says it can’t be fun at the same time?

This winter, Rippin’ Chix offers clinics at Whitewater, Silverton, Crystal, Alta and has added a new snowcat camp with Backcountry Snowcats just out of Pemberton. Details at rippinchix.com.