I first had the chance to share this piece at Arc’teryx’s The Bird blog. Thanks to Sarah Leishman for giving me the green-light when I said I wanted to write “something about adventurers trying to maintain their minimalism after having a kid without writing a mommyblog…”

My husband gets the job of going through our dead friend’s truck.

It takes him about a week – there’s no urgency on the part of the estate, family members are dealing with other things – but it’s so emotionally confronting that every now and then he just has to walk away, and take a few hundred breaths.

Call it the life changing magic of tidying up life’s loose ends and saying fuck it to a conventional retirement full of knick-knacks and coffees at the golf clubhouse, but Dave McCord’s truck really does read like a life manifesto in 10 artefacts and three blue Rubbermaids.

There’s a quiet mastery revealed by what remains – although it’s not been curated with an eye for being instagram worthy. It’s just one man’s honest and flawsome chaos, replete with empty beer can in the cup holder and wrapper of the last Egg Mcmuffin he inhaled before he was dropped to the airport.

And we find ourselves, once again, as apprentices, learning from the old man who was our house designer, fellow builder, my husband’s mentor.

Since Dave McCord’s retirement from designing and building custom homes in Ottawa, he’d been living between 3 countries – Iceland, South Africa, Canada – chasing the season and thermals as a 60-something vagabond paraglider, a sport he took up after he’d turned 60, because he was spending some time in Pemberton, BC, and mountain biking struck him as too dangerous. He’d roll his pension into plane tickets and trade labour, mostly as a carpenter, for life necessities (a bottle of Famous Grouse being top amongst the essentials.)

He kept a small 10 x 10 shed near Ottawa, with his tools, photos, family heirloom type things he felt he owed it to his daughter to keep around; dropped into a small bedroom in a sharehouse in Pemberton, with a couple of 40 something lesbians whose parents were concerned he was some kind of con artist; spent summers in South Africa with his daughter and her family; and was passing the northern summer in Vik, Iceland in a space the size of a mattress.

The bewildering sense of loss that had landed when he died in a paragliding accident in Iceland, the realization that the chain-smoking adventurer wasn’t going to suddenly pull into our driveway and declare himself back in town for a few months, did little to prepare us for cleaning out his truck. He had pared life down so cleanly, rendering the artefacts of his life curiously powerful. With no clutter or chaos or noise amongst his stuff, everything that remained was signal – and it signaled, so clearly, what he valued, what mattered, what he had chosen to keep.

In distilling his life down to his passions, he left a lot of room for people.

And every time he moved on to the next stop on his global vagabond circuit, he’d put the lids on the bins, close the door of the truck, tuck the key above the rear vision mirror, and move on. He did not feel weighted down by his stuff.

Neither did his daughter. “Pass it on to anyone who might get some use of it,” she said. “If there’s anything of value, sell it, and have a party.”

I think about this as we pack up for our annual fall road-trip – a tradition that started well before there was a kid in the equation, when we were seasonal workers who had shoulder seasons to adventure with and sun to seek out.

How lightweight can you go in life? What do you actually need? To be happy?

I look around at all we have accumulated, since we landed on the West Coast as couple of skiers, in our 20s, with just a couple of duffel bags and a climbing rack. Our gear footprint has proliferated even more since taking up mountain biking, stand up paddle-boarding, building houses, getting two electronic devices (at least, each), and having a kid. It’s overwhelming.

There’s nothing ultralight or streamlined about it. And, because what you own owns you, maybe it’s why our forties feel so weighted down. We’re so far from those footloose twenty-somethings, from the mindfully pared down 60 year old. We are burdened by the clutter, the lack of clarity or single-minded purpose, the overflowing garage, the kid’s accessories.

But this is our stage of life. We’re not winding it down. We’re growing it up. We’re building. We’re juggling. And every fall, we get a little taste of the ultralight life.

We disappear, pack what we need into a tiny A frame trailer, and drive south. Armed with bouldering pads and a little green pedal bike, we chart a course for adventure. It’s an experiment, an inquiry, and a chance to reset, to realize that life doesn’t require anywhere near as many props as have accumulated.

Because the kid plays with sticks and sand and piles of dirt.

Because we wear the same clothes every day.

Because popcorn makers and mixmasters and blenders are so redundant when you have a cookstove and a late night fire.

Because our edited life, when the signal becomes clear, is full enough with a solar panel, fry pan, coffee maker, book.

All the props I think I need to stave off crisis or prevent a kindergardener’s meltdown are sheer clutter, in the face of great open spaces and each other’s company, a campfire, a tree to climb, a place to pedal our bikes, some dirt to move around.

One sleeping bag. One headlamp. One cup.

This is what our friend Dave McCord had worked out too.

He wasn’t an ascetic. His life wasn’t meager. He always had a pocket full of chocolate for the four year old neighbour, who has come to think of him as a paragliding Santa. He always had a Bluetooth speaker clipped to his belt, because music was his passion and shared language. He had tennis rackets and paragliding wings and in his truck, there was a football, for tossing around on down days.

But he had made room.

He had room, in his life, for people. And experiences. Spontaneous experiences. And his truck, with the blue bin of camping gear (a two man tent, sleeping bag, extra thick air double air mattress, (why sleep alone if you didn’t have to?), box of granola bars and sardines as emergency rations) – was always ready for a road-trip to chase the thermals, the weather, whatever adventure was brewing.

That’s not our phase of life. (Whether it actually could be is a decision with such a long tail that I can’t wrestle at this moment.) But as we load the trailer to head south, we get a chance to practice that way of being, the lightness of it. The levity. The sheer loveliness. To select each thing, and make it count. 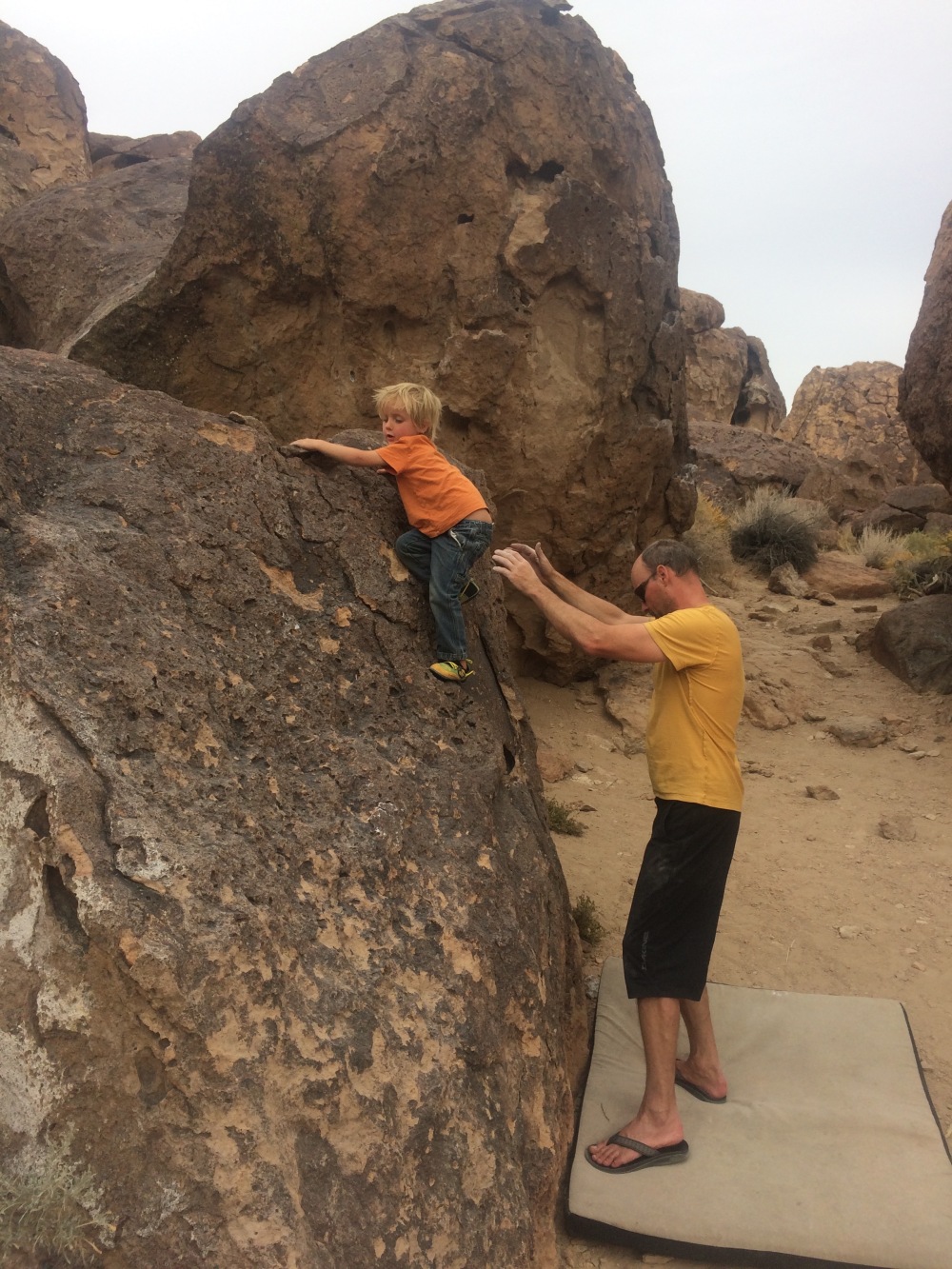 This story first appeared at http://blog.arcteryx.com/a-capsule-life-adventurer-edition/

It could loosely be considered a sequel to this post, from two year’s previous, when we headed to the same destination, to discover for ourselves how hard it is to climb once you have a kid. You will see, if you look closely at the pictures, that we have accumulated a shit-ton more stuff. But we’re still dirty. http://blog.arcteryx.com/we-attempted-a-climbing-trip-with-a-toddler-and-this-is-what-happened/