I have not bought garlic at the store for at least 5 years.

Not so much as a single bulb.

I have achieved Garlic Independence.

I don’t say this to brag. 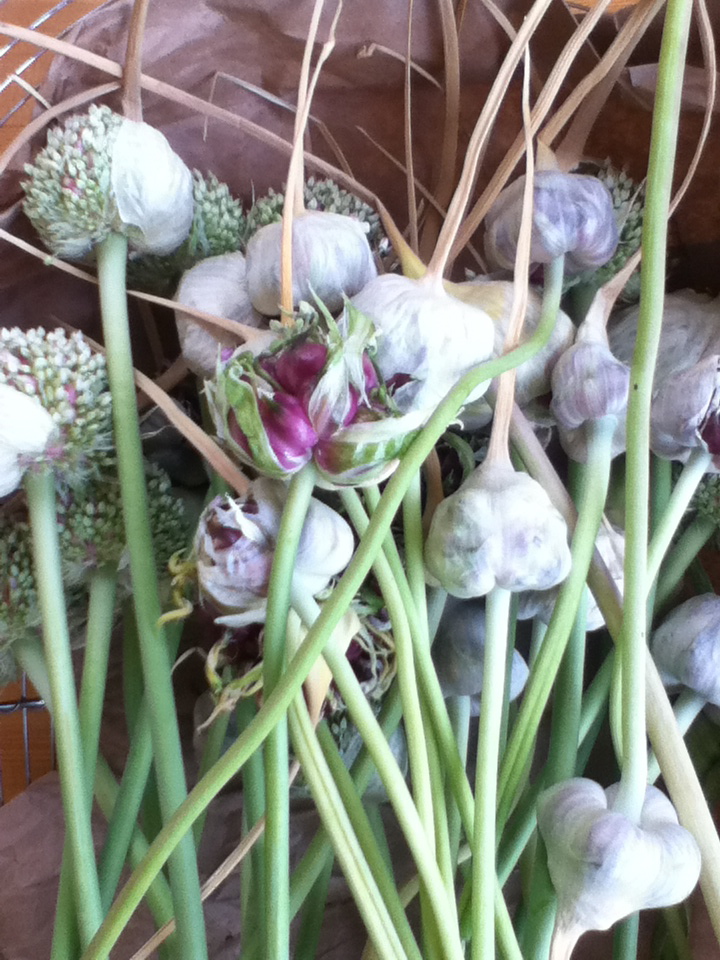 I’m proud of it, sure. But I also deeply suspect that the minute you announce publicly “I am an amazing garlic grower”, your just-now-reaching-for-the-sun crop will die, in the same way that when you’re surfing/skiing/mountain biking and you think, “wow, this feels amazing, I’ve really got this”, you fall immediately, abruptly and without warning, on your face, giving yourself roadrash/whiplash/ego-shock/all of the above. Call it hubris, jinxing yourself, or the hairy hand of god coming down to put you in your place, I usually try to stop myself from out-louding a feeling of success lest the universe immediately intervene with a big fat humility sandwich.

I admit the garlic bonanza, though, with a sense of abiding disbelief. I’m a tragically inept gardener, homesteader, and homemaker in general. Until I was 30, I thought radishes grew in bunches, just like potatoes, because that’s the way they come at the grocery store. If your life depended on me, you’d be casting about for a new overlord, and fast. 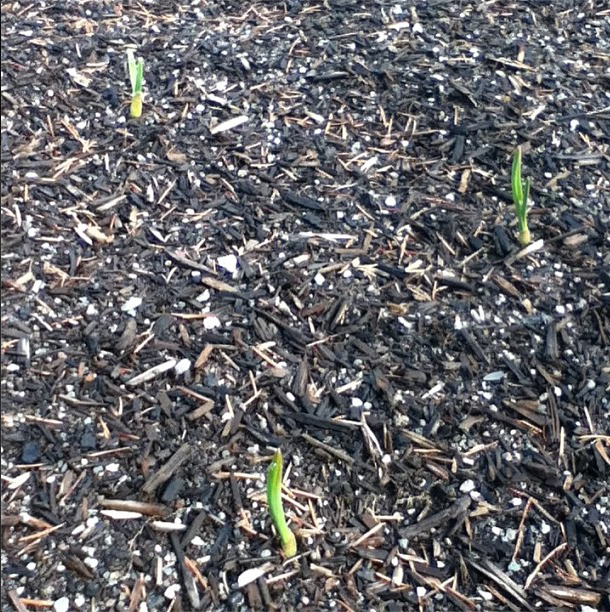 But here’s the thing. I have an honours degree. When I was a tadpole, I won academic awards. I even won a scholarship to a hoity toity highschool based on apparent brain power. It’s utterly messed up. I’m the privileged beneficiary of a system that values All The Wrong Things.

I was supposed to be a better economic unit, I suspect. Instead, I now stand in my garden, staring in wonder at the bed of garlic shooting up with vigorous enthusiasm.

I declare this Garlic Independence out loud, despite the self-curse risks, because I think we urgently need to reclaim – well, pretty much everything that is beautiful and healthful and life-affirming, starting with our right to grow our own food, from our own saved and shared seeds, from the clutches of multinational corporations, patents, Big Oil and Big Ag, late capitalism and our own sense of despair.

It’s due for an overhaul, this system of ours. (As Caitlin Moran says, “I’ve lived through ten iOs upgrades on my Mac – and that’s just something I use to muck about on twitter. Surely capitalism is due an upgrade or two?)

But alternatives don’t exist unless we start building them, in advance. Moran quotes Milton Friedman:

“Only a crisis – actual or perceived – produces real change. When that crisis occurs, the actions that are taken depend on the ideas that are lying around. That, I believe, is our basic function: to develop alternatives to existing policies, to keep them alive and available until the politically impossible becomes the politically inevitable.”

Growing food is one of the lost arts in my family – but it only took a wrong turn a generation ago. My grandmother knew how to knit and sew and repair things, how to pickle and can, bake bread. And before her, her mother didn’t rely on a grocery store at all.

To my mother, I suspect like a lot of Baby Boomers, that self-sufficiency all represented poverty and the smallness of a life she wanted to escape. She now gets great pleasure in going to a farmer’s market or a little foodie boutique and buying an exquisitely packaged jar of chutney “just like Mother used to make.” Nothing makes me sadder to not have grown up by a bubbling stovetop, learning that recipe, from my mother, who was passing it along from hers.

No doubt I should be grateful for all the other things my grandmother had to do, that I don’t have to, because of my mother’s ambitions for more. But some of these things, (in my privileged world of endless choice, where, despite a dearth of survival skills, I actively flourish), I choose to reclaim.

And reclaiming them is some uphill effort. I started from complete ignorance. How do you put the garlic in? Which way is up? Do you peel all the skin off? I googled the patently obvious. I still felt adrift. So I called a friend. Anna stopped the tractor and explained over the phone, practically, simply, without laughing in my face. “You can do it,” she assured me. “Call me with questions.” And she went back to the business of organically feeding humanity.

This Garlic Independence Day, come late summer, I will (touch wood) harvest my sixth crop of garlic – all the garlic we’ll eat for the next year, plus enough to plant next year’s crop, and then some. It represents more than just vampire-proofing. It’s a symbol of the possibility of it all. Of reclaiming what is rightfully ours – all the life-supporting systems. I’d like to do the same with eggs, with honey, with so much that seems essential to a grounded life, and the garlic tells me, you can do it. Just be brave. And hopeful. And ask for help. And read the fucking instructions 20 times.

“Your ancestors are cheering you on,” I will tell myself, thinking of all those grandmothers who wish they had the choices I have. And so are the ones you will be ancestor to, one faraway day. They’re the ones really counting on you to make good choices now.

With this story, I relaunched my fortnightly column in the Whistler Question as The Velocity Project: how to slow the fuck down and still achieve optimum productivity and life happiness.