On the corner of my desk is a pile of borrowed books.

I leave them there, taking up valuable real estate, to remind me to return them. Some day. Preferably soon.

One, Ski Faster, by Lisa Feinboer Densmore, sits in a manilla envelope with Doug Deeks’ name pencilled on the label.

I’ve been meaning to return it to Doug for more than two years.

I discovered this morning that I left it too late. He passed away earlier this week.

Doug loaned me the book just before the Olympics when we sat down at the Wildwood after his Rotary meeting so I could interview him for a profile in Enterprise magazine. 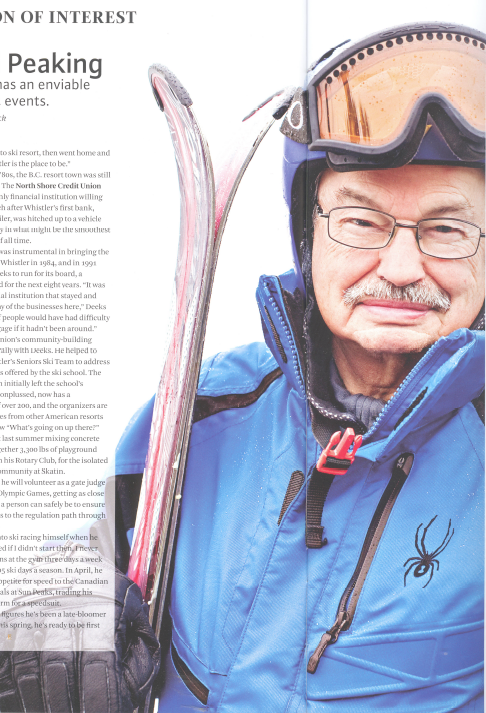 He was excited about serving as a volunteer gate judge, and I confessed that I had landed a gig covering the alpine ski racing events for NBCOlympics.com, but had kind of bluffed my way into it.

“Do you know much about ski racing?” went the phone interview.

“I’ve been a ski pro for the last decade.”

“So, Doug, as an aside, what’s the different between Super G and slalom?”

He was not a big man, and there was something twinkly-impish about his face that made me trust him with my dark secrets and complete ignorance.

“I’ve got this book that you might find helpful,” he said.

Talking to Doug that morning made me realise how many talented people concentrate in Whistler… and what a huge number of them are in their 60s, 70s, and 80s, enjoying a fine Second Act, skiing around with a bunch of 20-somethings who have no idea just what they accomplished in their remarkable lives.

Here’s the article. Good passing to you Doug.

By his own admission, Doug Deeks is a late bloomer.

“A late bloomer and a lousy student,” he says with a good-natured chuckle. Having held such titles as principal flautist in the Montreal Junior Symphony Orchestra, assistant auditor general of Canada and master ski racer, Deeks’ underachieving high-school marks are easily laughed off.

Being a late bloomer isn’t such a big deal either when you’re 81 and “still peaking as an athlete.”

Deeks, who will serve next month as a volunteer gate judge in the Olympic alpine events, hadn’t set foot on a slope until he was 24. He bought his first pair of skis while working as a student auditor with Coopers Lybrand in the early 1950s: “Up until then, living through the Depression, my family didn’t have the money.” Ever since the first time Deeks and a colleague walked up Mount Royal, the highest point in Montreal at 234 metres, and surreptitiously maneuvered to its base, he was hooked.

For almost a decade (until marriage, children and work temporarily suppressed his inner ski-bum) Deeks was part of a group of friends who avidly skied the Laurentians and Appalachians.

Ironically, it was in those eastern peaks that he made his first connection to Whistler, BC. Former ski buddy Jack Bright had been recruited to serve as the then start-up resort’s first area manager. “Whenever I’d come out to Vancouver on business, Jack and I would get together, and he’d keep me apprised of what was going on.”

Deeks and wife Joan had meanwhile decided to retire somewhere fun while they were still physically and mentally active. After a “serendipitous” career, Deeks was comfortable taking chances, but he nevertheless performed due diligence even while planning their retirement move. In 1987, he and Joan hit the road on a downhill tour of the West. “We went from ski resort to ski resort, then went home and said, yep, Whistler is the place to be.”

In the early 80s, the BC resort town was still finding its feet. The North Shore Credit Union had been the only financial institution willing to open a branch after Whistler’s first bank, housed in a trailer, was hitched up to a vehicle and driven away in what might be the smoothest bank robbery of all time.

Jack Bright was instrumental in bringing the credit union to Whistler in 1984, and in 1991 encouraged Deeks to run for its board, a position he held for the next eight years. “It was the first financial institution that stayed and supported many of the businesses here,” Deeks recalls. “A lot of people would have had difficulty getting a mortgage if it hadn’t been around.”

The credit union’s community-building ethos sits naturally with Deeks. He helped to establish Whistler’s Seniors Ski Team to address a gap in services offered by the ski school. The program, which initially left the school’s management nonplussed, now has a membership of over 200, and the organisers are fielding inquiries from other American resorts wanting to know “What’s going on up there?”

Deeks spent last summer mixing concrete and putting together 3300 lbs of playground equipment with his Rotary Club for the isolated First Nations community at Skatin.

This winter, he will volunteer as a gate judge for the Winter Olympic Games, getting as locse to the action as a person can safely be to ensure each skier keeps to the regulation path through the racecourse.

Deeks got into ski racing himself when he was 65. “I figured if I didn’t start then, I never would.” He trains at the gym three days a week and averages 105 ski days a season. In April, he will take that appetite for speed to the Canadian Masters Nationals at Sun Peaks, trading his volunteer uniform for a speedsuit.

Doug Deeks figures he’s been a late-bloomer long enough. This spring, he’s ready to be first out of the gate.

Since the article ran, Doug and Joan were featured as  local “power couples” in Whistler the Magazine, Doug won the 2012 Kokanee Valley Race series in the 80+ category, sharing the rank with Werner Himmelsbach, and was honoured for his work with the Skatin First Nation by a Queen’s Jubilee Medal. 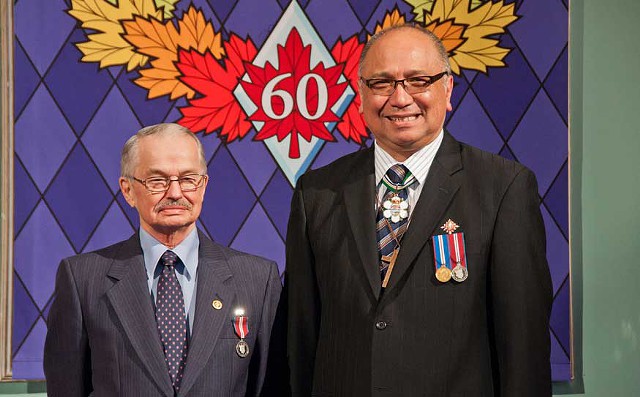 He was truly an inspiring human being. (PS Thanks for the crash course in ski-racing, Doug. I did manage to pull it off. Thanks to you.)