It didn’t weird Dr Suzanne Simard out, when I told her I talk to trees. Dr Simard is a professor of forest ecology with UBC and the researcher behind the viral TED talk that introduced the general public to the idea that trees communicate with other trees, and share information, carbon, energy, in collaboration with each other, through a vast underground network of mycorrhizal fungi. 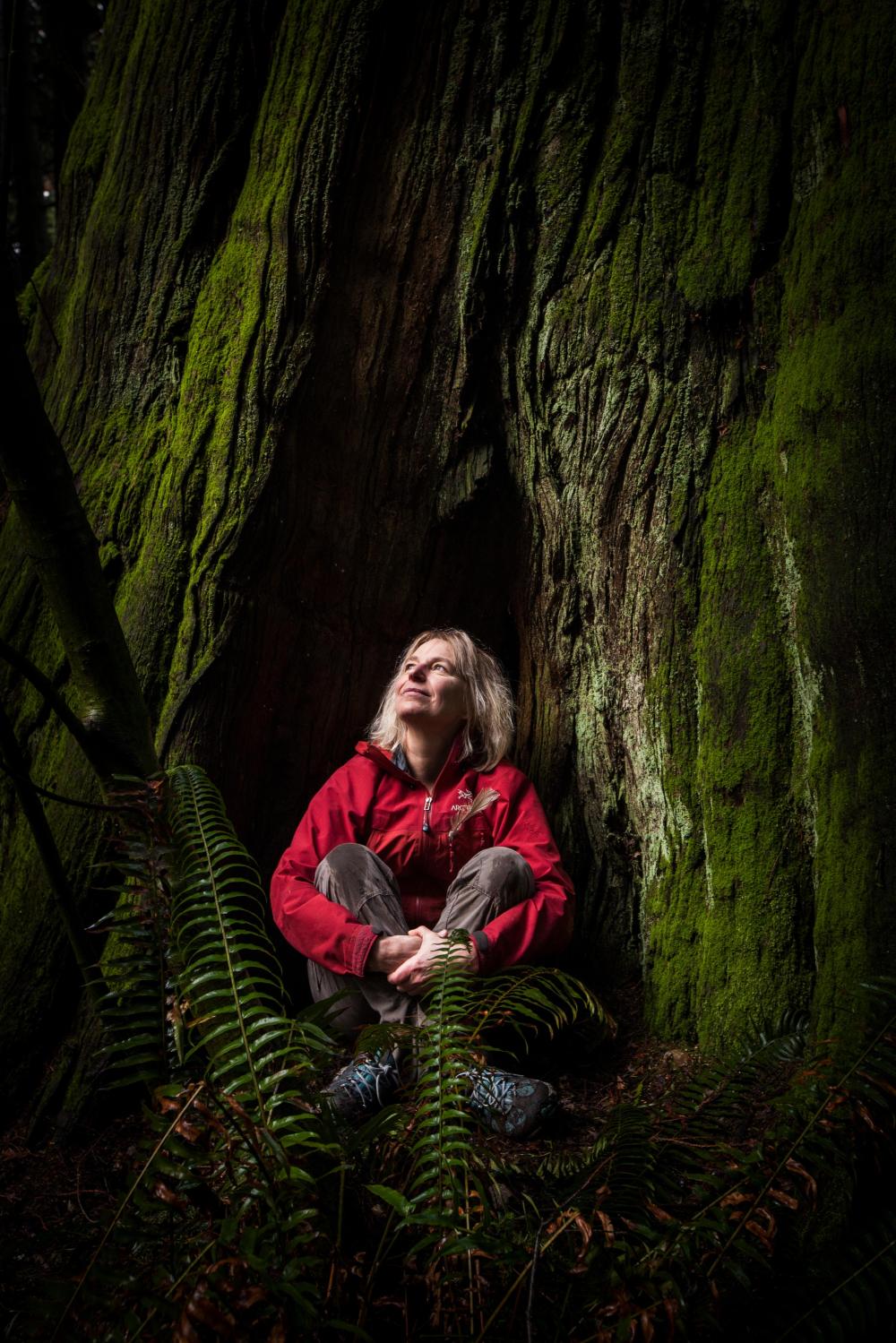 It’s impossible to hear her research findings and look at a forest in the same way again – which might be why she’s been such a flashpoint for industry and government and reductionist scientists, bent on seeing forests in quantifiable harvestable board feet or a major input in GDP or an aggregation of carbon atoms.

Featured in Treeline, Jordan Manley’s most recent film, Dr Simard says, “Intelligence is a word that we ascribe to humans and animals and we tend to associate it with nervous systems and brains. Plants don’t have nervous systems or brains like we do, with neurons and axons. But when we dissect the pattern of the mycorrhizal network mathematically, it’s the same pattern as the neural network, evolved for efficiency of communication, kind of like a brain. When we look at the actual compounds moving through the network, some of them are exactly the same as neurotransmitters in our brains. Plants do have intelligence in a broader sense, in that they are perceptive and they receive information, they make decisions, they have memories, they can learn. These are all attributes and skills that we ascribe to intelligence. And they’ve been evolving those skills for hundreds of millions of years, far longer than the humans or the animals that came much later in evolutionary history.”

Having barely digested this radical intepretation of “intelligence”, I trundled down to the remnant strip of trees between my house and the road, and began sending my thought-waves out into the forest, acknowledging this exchange of air between us, the complexity and relationships and sub-surface whispering that I hadn’t really considered. That afternoon, as my work day wrapped up, I walked dreamily down the drive to pick up my son, and the world had suddenly come alive.

I’ve been a poor noticer all my life, so much in my head that I’m hardly in the physical world. Being what the best poets do, I always wanted to see the forest and name its intricacies with specificity and lyrical intent. I wanted to be able to forage, and wayfind and not get lost or eaten, but basically, all I ever saw was green. A great big swath of impenetrable monotonous homogenous nature.

True wilderness, frankly, scared the shit out of me.

But suddenly, that day, I was pulled into noticing – incredible details. Names I used to fumble for, attached, lodged.It struck me that, having finally acknowledged the trees as “beings” that morning, they had reciprocated by shrugging off the green veil between us, and allowing me to see the kind of details one needs to get oriented, enter relationship, and interact, instead of stumbling around, dazed and lost.

Could coming into harmony start with a simple act of acknowledgement? (Consider the implications for human relationships – so simple! So radical!)

Dr Simard’s research, once groundbreaking, now widely reinforced, has helped establish that trees communicate with each other.

The next line of inquiry is to ask: what might they communicate to us?

“It’s kind of a fraught topic,” acknowledges Dr Simard. “From the point of view of western science, we interact with the world, but the forest doesn’t interact with us.”

The scientific and health benefits of “forest bathing” are now well documented. Interacting with the forest is good for us two-leggers.

“What is not as known is that trees actually respond to how we’re interacting with them. People have accepted that trees communicate and interact with each other – they respond, emit chemicals, send messages. But we haven’t gotten to the step of accepting that they’re actually responding to us, because then we have a responsibility, to pay attention and respect those response from the trees.”

That, of course, would mean, we don’t clearcut them. We don’t treat the forests like a personal Walmart. We don’t take without asking. We don’t take if the answer is no. Establishing this hypothesis was the next step in Simard’s trajectory of inquiry but she’s been busy writing a book, and frankly, she’s gun-shy of the blow-back. It wasn’t easy being a pariah for the years when she first shared her discoveries. “I’m getting kind of tired,” she admits.

“I’m very passionate about forests,” says Dr Simard. “It’s so visceral for me. I grew up in the forest. And here we are introducing our children into this very difficult predicted future. There’s going to be tough times ahead. And the crux is that we need to get people back to realizing that we are all part of the ecosystem. We’re not some superior race, or something different. We need to get back into the forest, relating to the forest as an equal. An equal to the trees. An equal to the whale.”

Simard laughs ruefully at her ‘radical’ discoveries. “Everything I’ve discovered has pretty much been said and known for a long, long time. It’s just that I took these little isotopes and counters and measured it and published it in a journal and suddenly it’s credible. Aboriginal people have been waiting patiently for us to get this, for years: respect and reciprocate with the tree, and show it thanks.”

So what are you waiting for? The trees are literally waiting for you, to step into their embrace and say thank you.

The Velocity Project: how to slow the f*&k down and still achieve optimum productivity and life happiness, is a column that runs every other week in the award-winning Pique newsmagazine.