My local newspaper has folded. 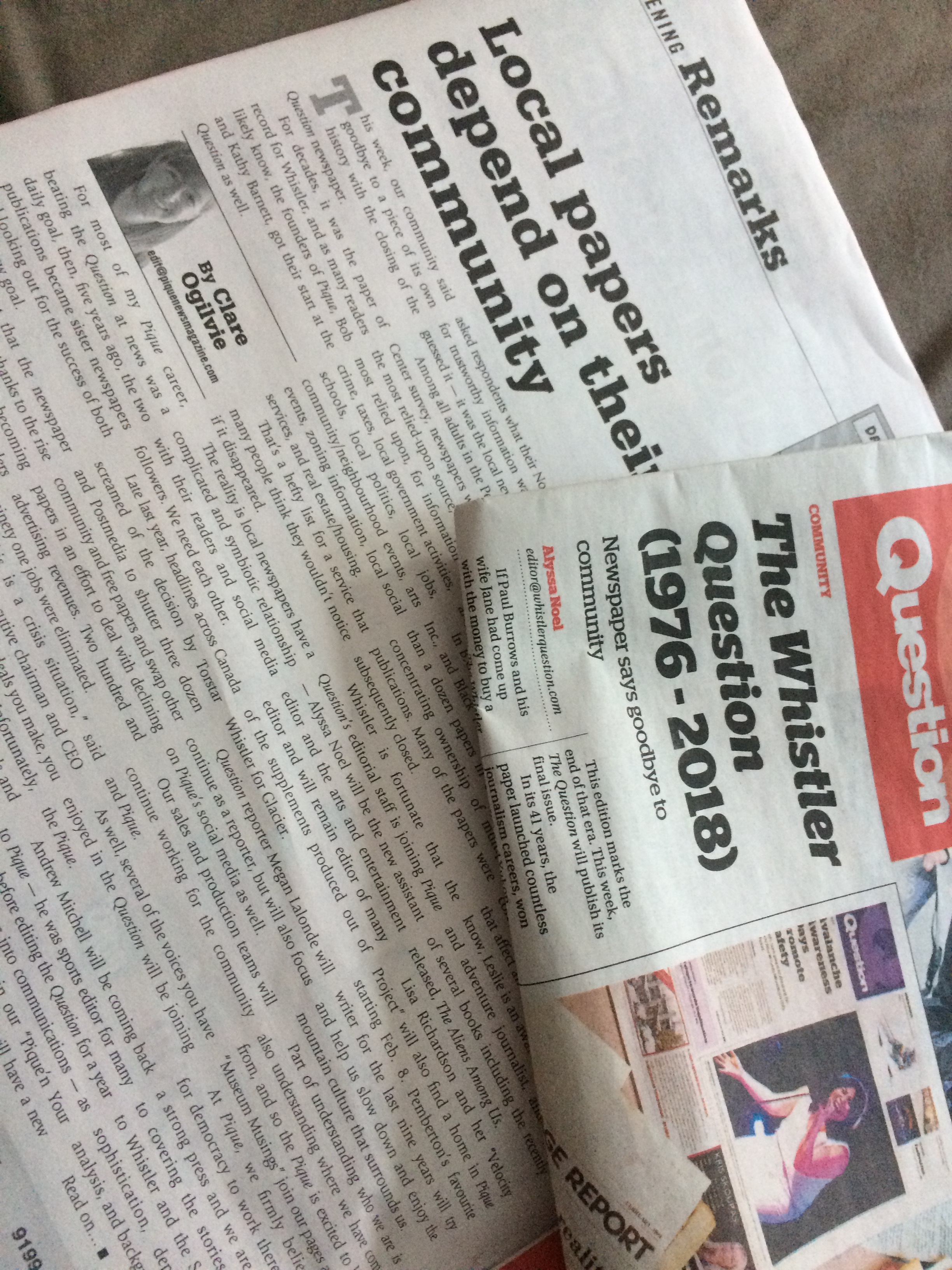 And its sister publication, The Pique, which already absorbed the Question’s editorial staff, found space for me, and my column, too, starting February 8.

In the editorial yesterday, Clare Ogilvie announced the changes.

“Lisa Richardson and her Velocity Project will find a home in the Pique. Pemberton’s favourite writer for the last nine years will try and help us slow down and enjoy the mountain culture that surrounds us.”

About six years ago, almost to the day, I was conceiving a big project, a book-length project. I drafted up a pitch letter to propose writing a column in the Pique as a way of making that happen. The book would be called Slow The Fuck Down and a series of columns called The Velocity Project, would, by way of instalments, help me move it along.

It was a great idea and a really smart strategy. But I I never sent it. #FEAR

I’d recently had my annual Christmas lunch date with the Question’s then editor Jennifer Miller – we were both literally working so much that Christmas Eve was the only likely day we could free up each year. (The Slow the Fuck Down thing was an urgent intervention.)

I drafted the initial pitch to Jennifer, thinking it might be easier to squeeze space in the Question. Even though I thought it would be a better fit for Pique. Even though, in my mind’s eye, I could see it in the Pique. A few days later Jen announced she was moving on from the Question. I never sent the pitch. To anyone at all.

I literally just found it in my email drafts.

Six months after drafting that proposal, I discovered I was knocked up, and the whole book project, about 5 chapters in, stalled out. #EXCUSES

A year later, a new editor at the Question, the wonderful Alyssa Noel, asked me if I was interested in the column space that Grace Chadsey had just, after 13 years and 240,000 words, left open.

My first, and incredibly powerful, reaction was to say no. I didn’t want to do a news and event round up column like Grace had. I’m not funny, or political, or particularly fierce, feisty or opinionated. I’m just not columnist material.

But I was working on a blog, The Wellness Almanac, as a communications strategy for The Winds of Change, a project I was, and still am, very passionate about – and I thought that maybe a column supporting the website could help lift it’s profile and reach more readers. (Ever the enabler.)

I asked some valuable contributors what they thought of the idea, and Evelyn Coggins, Michelle Beks and Veronica Woodruff all said:

I’d envisaged the column being extracts of their stuff, as much as anything. Literally, a way of amplifying the blog.

It was about local people and the signs of spring and noticing.

I did not notice, at the time, that I was dodging a huge opportunity, that I’d previously wanted.

Slowly, with practice, and the power of a bi-weekly deadline, the column grew into itself.

It’s not that I grew more confident in my own voice, so much, as that I was writing often late at night, while everyone else slept, deadline breathing so hard down my neck that I didn’t have time to mask my own breathless voice and sound more the way I thought I should sound…

When funding for The Winds of Change began to look uncertain, it occurred to me that it was time to stop writing on behalf of something I had no clear mandate to be speaking for.

I finally came out on my own.

I pitched Alyssa about 10 different column titles for my column 2.0 and she picked: The Velocity Project. She even let me craft a byline to explain it:

Those words ran in the newspaper under my column every other week for almost two years.

When the Question folded this week, by some cosmic magic, I was offered a biweekly column in the Pique called the Velocity Project.

I didn’t pitch or propose it. I didn’t make the case for it. The editor dropped me a note and said, this is what we’d like from you.

Exactly what I’d conceived and drafted up, but never sent, six years before.

This time, I was smart enough to say YES.

Through my head-shaking baffled bumbling wonder at all this, I deduce:

1. There really is Powerful Magic in crafting an intention, and committing it to actual words, even if you do it in the most bumbling inept fashion imaginable.

2. If you can finally get out of your own fucking way, the thing you dream of is right there waiting for you.

3. Without good people nudging you forward with great love or just the right timing and enthusiasm, you might still be shaking and quaking in the wings.

I have often loved that quote of TS Eliot:

We shall not cease from exploration. And the end of all our exploring. Will be to arrive where we started. And know the place for the first time.

Here I am, at the beginning. Where I had suggested to myself would be a good place to get started.

Staring down the same project. Cracking my knuckles. Opening a Word doc.

Squandered a lot of time getting from there to here? You could look at it that way.

Or, through the filter of self-kindness, one could say, well,  I’ve covered a lot of ground, between now and then. I’ve done so much work over the intervening years, learned so much – about getting out of my own way, being okay with taking up space, learning to ask for help.

I asked for this. And yet I didn’t. But still, it came.

When the time was right, maybe?

In the way the universe works, maybe?

Dreaming, I suspect, is how everything is sung into existence. Everything.

In spite of ourselves.

And because of ourselves.

Sweat and stardust. What a magic combination.