As typhoons lashed the Pacific North West and snow-fiends began to binge-watch the lastest ski flicks, we packed up flipflops, sunscreen, bouldering pads, bikes, tiny trailer and solar panel and booked it as far south as a car-seat-imprisoned three and a half year old would permit.

Three weeks later, in as far from a winter state of mind as you can possibly get, under the already searing blaze of a 9:45am desert sun, the kid, all perennial moon-tan, in his floppy hat and undies, looked up from where he was playing in the sand, and asked: “Is it snowing in the mountains yet?”

I cannot explain it. He’s more obsessed with snow than we are.

We’re not trying to hothouse a little grom, we’re definitely not hyping it up. We’d keep driving south if we could, chasing the sun for a few weeks more. We’re feeling the forager impulse of our ancient ancestors hook in, sympathizing with that clichéd ritual of the golfing generation of snowbirds (only without the golf.) The wanderlust is rising, our systems of life on the road are just starting to iron out, the manic mind-clutter of our everyday lives has finally pared away, quietened.

The boy, however, is home sick. Snow-sick, to be precise. 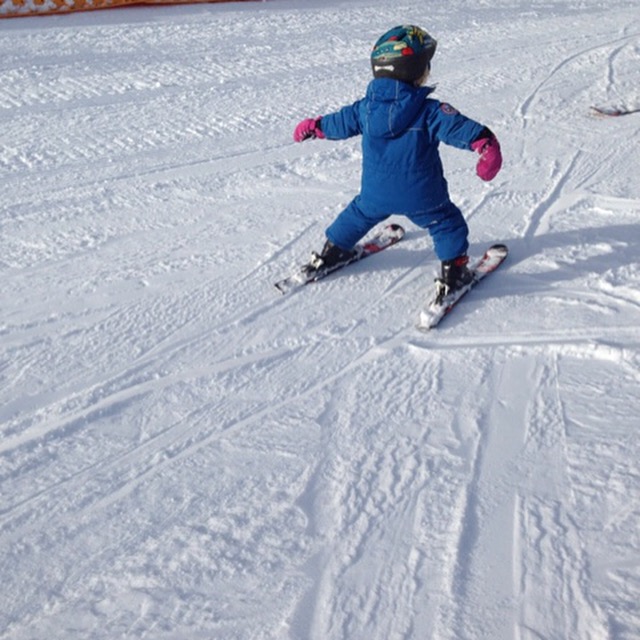 In between camps, destination-obsessed, we’d bribe him into each additional incremental hour of driving, tossing our righteous no-screen-time rules out the window, and handing over our phones. He’d navigate uncannily quickly to the videos, and watch himself, a year ago, practicing wobbly pizzas down the bunny hill. Play. Replay. Always with a shit-eating grin on his face.

A few years ago, I interviewed a woman at CMH heliskiing – her husband was a guide, she was a massage therapist, they’d raised their kids in some of the remotest lodges on earth. I was still a strong “No” vote on the Proposition of Having Kids – our lifestyle and love of skiing, climbing, mountain biking, even of drinking too much coffee and frittering the day away, seemed too endangered by the sheer presence of progeny. But she made the case anyway. “That’s the thing,” she said, grey-haired and strong, in her fifties, with no need to sell anyone on anything. “You actually get to share the things you love with your kids, and then, just as your own skills plateau, and you slow down, they start coming into their own. And you watch them get really passionate and good. It’s like you’re passing the torch. And it gives you as much pleasure to see them do it, as it did to have done it yourself.”

Seemed far-fetched to me at the time. The Anti-Kid part of my brain rebutted it immediately as the self-justifying rhetoric of someone who has no other option but to make the best of a bad situation. But some other softer part lodged it away, and it resurfaced all these years later, last week, late October, in the desert, as, in the endless sandpit of our campsite, the kid began his daily inquiry: “Can we go home now? To the snow?”

The torch thus, in good hands, shone our way back here, to the mountains, where the tease is in full swing, the snowline has begun its creep, and winter is about to get underway.