So the year’s over. Did you learn anything?

I learned that things other than obligations and deadlines have power…

Guess you’re ready for 2011 then. May the force be with you.

Power of water. The second largest landslide in Canadian history happens up the road in August. The Meager Mudslide travelled at an average speed of 60 metres per second. 220 kilometres an hour… the average speed of a formula one race car, and was caused by percolating water. Scientist Rick Guthrie said water from below and above gradually weakened the mountainside, causing it to hurdle towards the valley. Guess Bruce Lee was right.

Power of a mission. Ski mountaineer Greg Hill wakes up on 1 January 2010 with a mission – to ski 2 million vertical feet. That required an average of 5500 vertical feet every day. A round-the-world, snow-chasing suffer-fest. Totally self-propelled. He completes it with one day to spare. Slugs champagne from the bottle surrounded by friends and family, sheds a little tear, then takes one more lap, just for the fun of it. 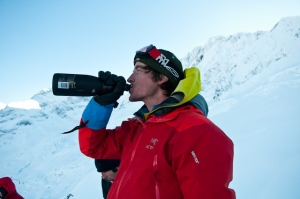 2 Million With Greg Hill from FD Productions on Vimeo.

Power of unplugging. Took a three week trip to Yosemite in the fall, and the New York Times was on my mind. Specifically, an article in which a group of neuroscientists went rafting and studied their brains off-line. Said psych professor and the trip organiser, David Strayer,  “Attention is the holy grail. Everything that you’re conscious of, everything you let in, everything you remember and you forget, depends on it.” Being plugged-in non-stop is eroding the quality of our attention. This month, Nick Bilton of the Times blogged about the topic again:

Over the last year I’ve started to notice that while technology allows us to connect to people far away, it can simultaneously disconnect us from people who may be directly in front of us.

He polls colleagues – reporters and bloggers who work the wired beat and discovers many are intentionally unplugging, for the weekend, with partners, at dinner, trying to find a balance between their use of technology to connect, and real connections, to “instill a discipline of mind.”

Power of ceremony. Early September, I rode the gondola up Whistler to witness an awakening ceremony for a welcome totem pole that had been carved by Squamish Nation carver Rick Harry and funded by the Whistler Blackcomb Foundation, through the incredible work of my friend Mei McCurdy. It was a hot day, there were a ton of speeches, and the part of the ceremony in which the women danced around the pole sprinkling water on it and smacking it with cedar boughs went on and on. I felt my attention start to wander back to my desk where a pile of deadlines waited, to an arm-length to-do list, thinking, okay, we get it, let’s keep this thing moving. Thinking, this is kind of a crazy thing to do with my first day off from writing, writing, writing, in weeks. Then Chief Ian Campbell took the microphone and explained, “What they’re doing here is awakening the spirit of the totem pole, because up until now, it has relied on the spirit of the artist to have life. But the artist needs to be free to move on to his next project, so we are awakening the spirit of the work itself, so it can stand on its own and so he can move on to his next project.” A little bit of my mind creaked open. Oh. Oh, that almost hurts, it feels so good. It was like corpse pose – the part of a yoga routine you usually skip, but the most important and difficult posture to master. The ceremony of completion is worth its own chunk of time.

Power of poetry. Brian Brett spent the fall in Whistler as a writer in residence, working with a dozen local writers. The first I saw of him was at the Gala Reading, sharing the microphone with 9 other guest authors. And he owned it. Spoke poems about motel rooms and sleeping amongst the sloughed-off skin-cells of the great unwashed. Poems about following bear tracks right back to himself.  It wasn’t poetry like your English teacher used to read, where you had to really concentrate. It was like the drinking the first big mouthfuls of beer after a day skiing. Afterwards, audience members confessed to one another: I wish we could have heard more from Brian Brett.

Now that the sun of my setting

approaches the last rise and fall

of the sun of my seasons —

the frosty breaths of this solstice

and the light pouring summer

into the lake of limpid water —

I count every morning and night.

the deeps of the water,

the deeps of this dark,

all those brilliant stars

punched into the night’s black fabric.

But if the old go to ashes

the young go to the light.

Bright and more bright the day after,

all their joys and the promise

of spring following the snow.

The threat of darkness only means

the crazy lustrous jewels of the world

blazing in the ashes of my bones

Light growing longer by the minute.

Every thing and any thing lovely,

catkins and flowers and calving grounds,

children and young dogs and seeds —

the promise of the longer day.